Two enormous ponderosa pines tower dutifully over the back corner of our home.  I have always thought of them as our guardians, poised tall and firm throughout strong winds and heavy snows, protecting our humble home.

It was under these trees where my daughter found a tiny fluff ball, with wings, a few long feathers atop its head, and two bulging eye sockets with eyes that had not yet opened to the world.  After watching it for some time, it appeared that it’s mother was not caring for it.  I don’t like this type of conundrum in life, I really don’t.  Do we try to care for the bird, not knowing how, or do we leave it be and let mother nature do her thing?

After a few phone calls, my husband, riddled with a deeply sensitive heart, found a volunteer, also known as the bird taxi, who would come and rescue the baby song bird and take it to our local wildlife center, where they would rehab it.  The volunteer told us that if a mother bird doesn’t come to help a fallen baby bird within a few hours, that she has probably given up on it.  This happens when the mother feels the baby is too young to be helped.  How tragic and practical mother nature can be.

The next morning the healthy bird was taken away in a small box.  We all felt complete and relieved with our happy ending.  Phew…

We arrived home the later the following day, when our daughter found another baby bird, in the same place.  This bird though was slightly bigger and hopped around with its eyes open, probably due to the fact that it is two days older than its brother or sister.

As we watched the bird, we noticed an adult bird hovering very close to the baby bird and acting rather strange.  We thought it was injured at first, because of the way it was flapping its wings frantically and scooting along the ground.  After watching for some time, I realized that it was the mother bird, and no, she was not injured.  She was trying to protect her baby, flapping her wings frantically to try to scare me away from her precious baby.  My heart pounded for her, as I so deeply related to her predicament.

Close by I noticed another, much more brightly colored bird quietly following behind the mother, everywhere she flew.  I looked them up in my bird book and concluded that these must be the warbler parents of the fallen baby bird.  They were caring for the baby!  How touched I was to find that both parents were caring after their baby, together as a couple.  But the baby was still helpless and could not yet fly.  Night was falling, and it was getting cold and windy on the ground.

My husband built a makeshift nest out of towels, on top of a heating pad.  I went to get the bird and put it in its “nest” for the night.  As I picked up the bird, the sensation of holding its tiny warm body strangely took me right back to holding my own new baby for the first time.  Its trembling limbs and large tummy were trustingly limp to my embrace. The fuzzy feathers atop its large bald head looked much like my four month old baby’s head.  The instincts I have as a mother were almost as strong for this bird as they were for my own child, instantly upon touching it, but not until then.  I wanted to protect this baby with every fiber of my body.  I am not a bird, but I guess I am an animal. 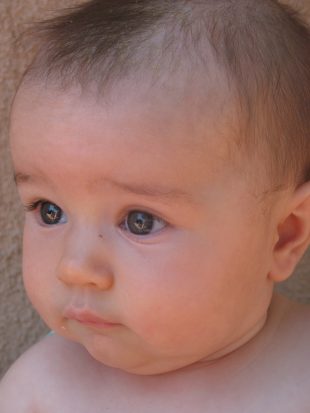 The next day the bird, and its parents, slowly moved further and further away from the nest we had built.  By the end of the day, all three were gone.  As I fell asleep that night, under the protection of our two grand ponderosas, I felt a great sense of wholeness.  Peace fell over my body and all was right with the world.